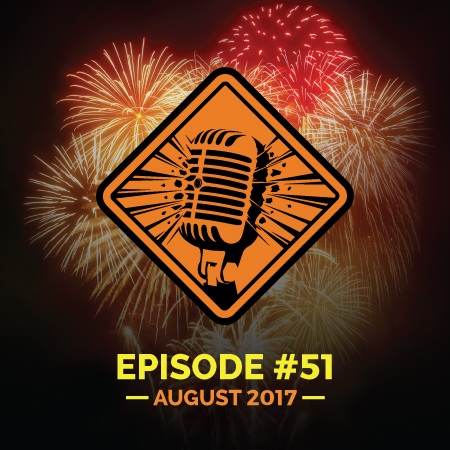 Johnny Starr and Ron the Banker are at Starr Fireworks in Fargo North Dakota for day one of the annual P.G.I. convention. Historically, when the Fireworks Brigade has recorded at the PGI, the episode was complete with the sound of fireworks bursting in the air and commerce as all the happy little pyros shopped at the Starr Fireworks booth. In what can only be considered a huge mistake by the Pyrotechnics Guild International (PGI), because of some senseless drama last year, Starr Fireworks, the Fireworks Brigade and several other vendors are not welcome this year.
To try and take some of the sting out of the snub, John and Ron get together to record episode 51 of the Fireworks Brigade. Joining them for this episode is Rob Berk and his son Jayden. Rob’s a tremendous father, businessman and a bit of a pyro. Rob and Johnny reminisce about past PGI’s and their mutual friend Larry Lomaz. Jayden’s an amazing teen with some great stories of his own.

Are you in search of the best and widest variety of fireworks in North Dakota?

Get in touch with the Fireworks Brigade at: