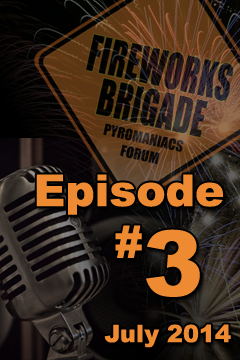 Johnny Starr and Ron the Banker adjourn to John’s office at Starr Fireworks in Fargo, North Dakota. This podcast is recorded sometime after midnight after a long day of working at Starr Fireworks. Retail week has begun and the days just got longer. Keagan, a Long time Starr colleague, joins the guys in the studio. Some of the topics covered in this pyropodcast include:

~ Is it possible to cook a pork chop using a 4 foot sparkler?

~ Droughts in Sacramento and “linchpins” with an agenda against consumer fireworks

~ Are lasers better than smoke rockets?

~ APA facts and figures regarding the growing fireworks industry

~ What does a half mil get you in Las Vegas and how does it tie in to pyro?

Connect with the show: