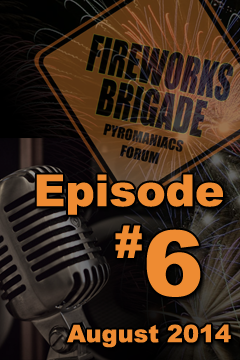 Hosts: Johnny Starr with Ron the Banker and Dino

Johnny Starr and Ron the Banker meet at the Pyrotechnics Guild International (PGI) Convention in Mason City Iowa. This year’s convention “Iowa Thunderstorm” is held at the North Iowa Events Center from Saturday, August 9th through Friday August 15th. The PGI is everything fireworks and includes public displays, seminars, a trade show, open shooting and much more. For more information about PGI please visit their web site at www.pgi.org.

Some of the topics discussed in this episode include:

~ What is the PGI and what’s all the noise

~ Boating tales with “Peter Pan” on the Chicago River

~ How to make shells with hemi’s

~ Glint in the Eye

~ End of the Line

~ A possible trip to the “Stinky Finger” in Hong Kong

~ Generic wrapped fireworks and the women that sell them

~ A conversation about PGI with Robin Cleveland, Membership Services Manager

Connect with the show: